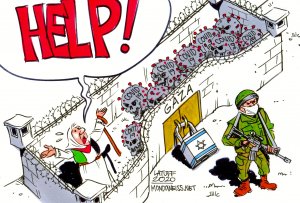 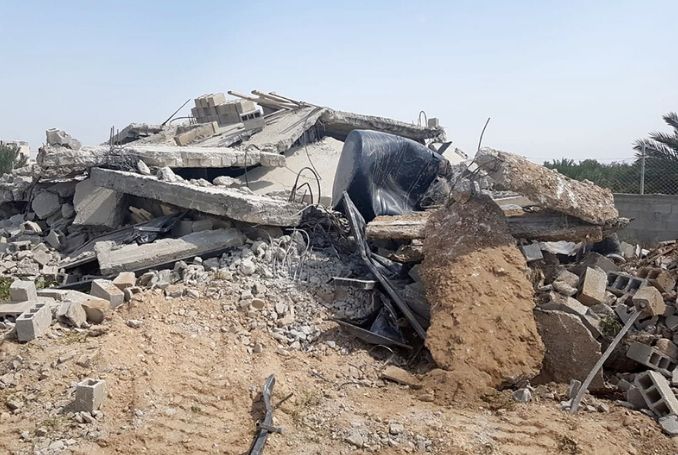 Israeli forces entered a Palestinian village to confiscate materials designated to build a clinic to deal with the novel coronavirus outbreak. 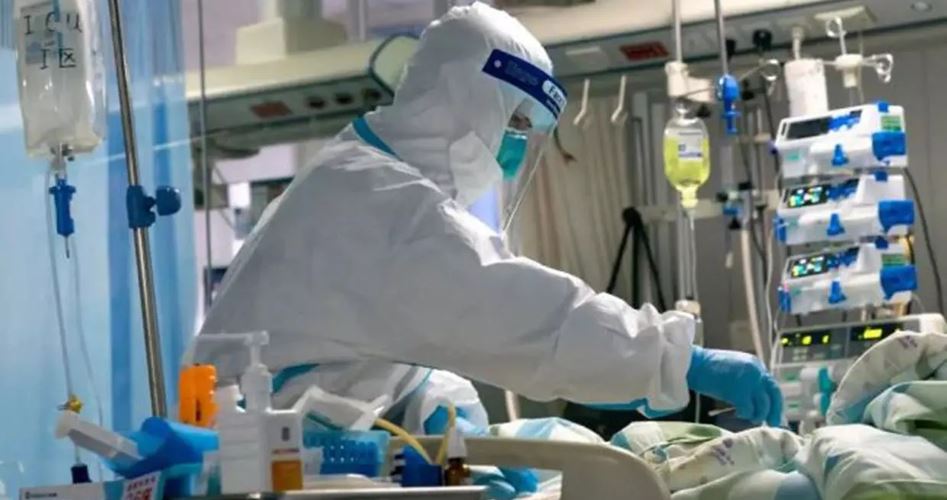 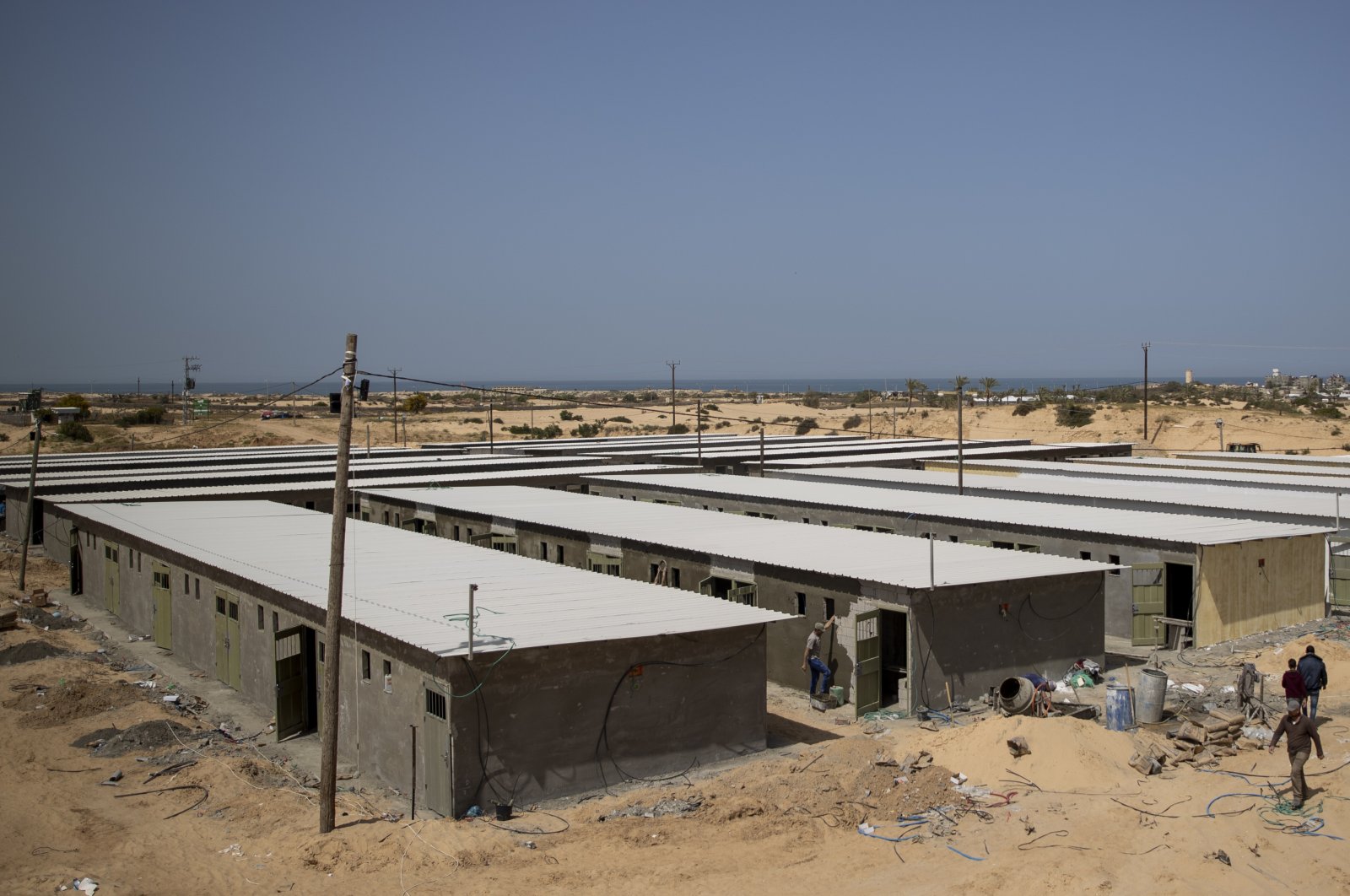 
When Nima Amraa returned to the Gaza Strip from neighboring Egypt earlier this month, she was surprised to learn she was being placed in a makeshift quarantine center set up by the ruling Hamas group.
But her initial jitters turned to fear when two fellow travelers in another facility tested positive for the coronavirus – the first cases to be confirmed in Gaza.
“Once there were cases of the virus spreading, we started to feel afraid and disappointed,” Amraa, a 30-year-old journalist, said by phone from quarantine, where she has spent a week and a half sleeping in a room with five other women and sharing a bathroom.
The virus found a way into Gaza, even though the Mediterranean enclave has been largely cut off from the world by an Israeli-Egyptian blockade since the Hamas group wrestled to control of it 13 years ago.
Yet the terrifying possibility of an outbreak in one of the world's most crowded territories – 2 million people squeezed into an area twice the size of Washington, D.C. – does not seem to have registered fully. Many in Gaza seem to accept Hamas' assurances that the threat is contained.

In the meantime, Hamas is racing to build two massive quarantine facilities – hoping to prevent the disease from spreading and overwhelming Gaza's already shattered health system.
The construction was ordered after photos surfaced from makeshift centers – mostly schools – showing people celebrating birthday parties with visiting relatives, food being delivered by volunteers and groups of people smoking water pipes together.
Amraa said it was immediately clear that the school where she was placed was not prepared to house so many people.
“I was worried after seeing that we will sleep on mattresses on the floor and we will be six in one room,” she explained. “We eat together and there is no isolation.”
She said she and her roommates take precautions, such as avoiding direct contact and keeping their beds two meters apart from each other. But that might not be enough to keep the virus from spreading. Last week, seven Hamas security guards who were in the facility housing the first two cases became infected themselves.
“We have been very clear on how the quarantine facilities should look like and offer in terms of facilities and services and support,” said Dr. Gerald Rockenschaub, the World Health Organization’s (WHO) director in the Palestinian territories. “But this is obviously easier said than done in Gaza, where there is a substantial shortage in almost everything.”

VIB
suite
Although movement in and out of Gaza has been heavily restricted since 2007, it is not cut off altogether. The first two virus cases were men who had returned from a religious conference in Pakistan, part of a wave of hundreds of returnees who were placed into quarantine.

No one knows how much farther the virus has spread. Only 20% of the roughly 1,700 people in quarantine have been tested.
Gaza's people live mainly in densely populated cities and refugee camps. The health care system is in shambles – a result of the blockade, three wars between Hamas and Israel and chronic under-funding due to infighting between Hamas and the rival Palestinian Authority in the West Bank.
Gaza has only 60 breathing machines – and all but 15 are already in use, according to the WHO. The agency has been assisting local health officials and has been working with Israeli authorities, who have no direct contact with Hamas, to import desperately needed equipment and supplies from international donors.

Most people infected by the virus experience only mild symptoms, such as fever and cough, and recover within a few weeks. But the virus can cause severe illness and death, particularly in older patients or those with underlying health problems. High rates of obesity, smoking and stress-related disorders appear to make Gaza’s population especially vulnerable.
Hamas has sought to beef up its quarantine efforts in recent days, opening 18 additional facilities in clinics and hotels and declaring them off-limits. It also has banned weekly street markets and shut down wedding halls, cafes and mosques and extended quarantine periods by a week.
After seeing images of the makeshift facilities, Hamas’ leader in Gaza, Yehiyeh Sinwar, ordered the group’s military wing to build two new quarantine centers.

Situated on the territory’s northern and southern borders, they will be able to hold 1,000 people. The group expects them to be ready within a week.
The public seems to have been calmed by Health Ministry claims that all virus patients are held in quarantine centers. Despite the shutdown orders, people still walk the streets and congregate around small coffee kiosks and noodle shops. That could change if cases begin to spread.
Last Friday, the crew for a Turkish TV station caused a panic after entering the field hospital where the nine infected people are being treated. The crew subsequently left the facility and broadcast a report the next day. Hamas quickly put the crew members into quarantine and suspended the head of its media office for allowing them access to the facility.

Elsewhere, people still held wedding parties in their homes after wedding halls closed.
Dr. Yahia Abed, an epidemiologist, said the public's apparent lack of commitment to safety precautions is worrisome and that anyone who might have been exposed to the virus must go into full and enforceable isolation.
“If, God forbid, people hid the fact that they had contact with the infected, this will be very dangerous for an area like Gaza. The epidemic will spread,” said Abed, a public health professor at Al-Quds university near Jerusalem. 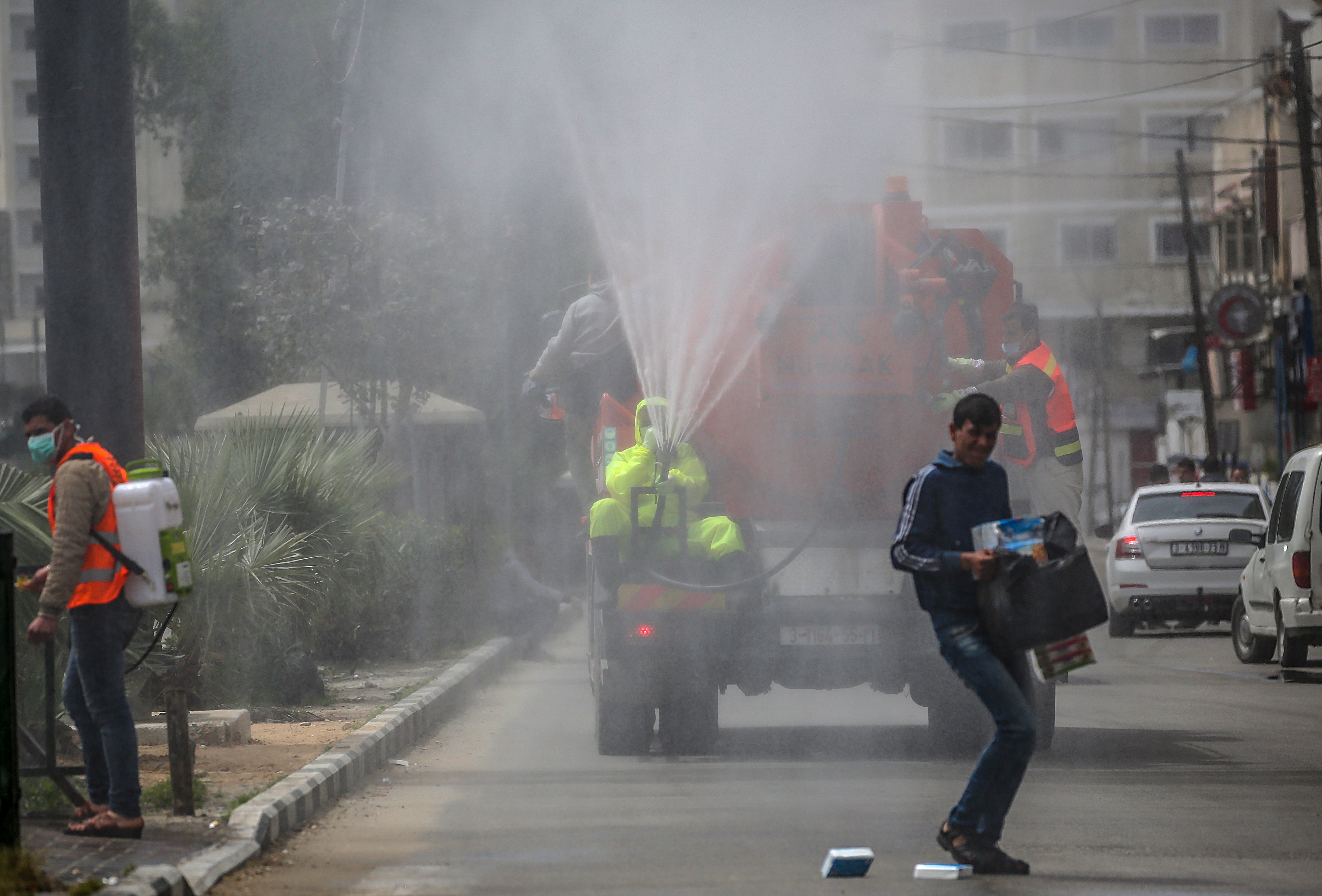 A Palestinian man sprays disinfectant as a precaution against the spread of the SARS-CoV-2 coronavirus which causes the COVID-19 disease, in the streets of Gaza City, Monday, March 30, 2020. (EPA Photo)

One factor in the small number of cases so far could be the lack of testing.
COGAT, the Israeli defense body responsible for Palestinian civilian issues, said it has coordinated the delivery of hundreds of coronavirus testing kits by the WHO, as well as protective equipment, medicine and disinfectant.
Israel, along with most Western nations, considers Hamas a terrorist group. But it likely fears the fallout from a catastrophic outbreak would spill over the frontier.
Qatar, which provides extensive humanitarian aid to Gaza, has also stepped in, pledging $150 million in aid and providing furniture, clothes and electrical appliances for the quarantine centers.
The Gaza Health Ministry says it urgently needs more than $20 million to stave off the collapse of the health system if there is a major outbreak.
Rockenschaub said there's still time to improve quarantine procedures in Gaza. “The issue is to move quickly and mobilize support to get them on the way to meet the right international standards,” he said.

Coronavirus in Gaza is both a threat and an opportunity for Israel
Opinion: Although the northern border appears to pose no threat right now, in the Hamas-controlled enclave a massive COVID-19 outbreak might result in another cross-border flare-up, as the militants who rule the Strip grow wrathful at the lack of medical assistance
Alex Fishman|
Published: 03.29.20

If Hamas officials would become overwhelmed by the number of COVID-19 cases in Gaza, they might lash out on Israel as a way to demand medical and logistical assistance to deal with the epidemic. The military officials' prognosis sounds almost apocalyptic in its estimates, predicting rocket fire so massive, it hasn't been seen in Israel in years.

A field hospital in Rafah intended for coronavirus patients

Scenarios include rocket attacks and mortar shelling of Israeli towns and cities in order to force Israel, and the international community, into actively helping the Hamas rulers to combat the spread of the virus.
Friday's rocket launch on the city of Sderot was a reminder to residents of the south, who are homebound under government orders, that prolonged periods of time in bomb shelters will not allow social distancing and lead to more infections on the Israeli side of the border.
Another nightmare scenario includes masses of Palestinians rushing the border fence to save themselves from the raging disease in the besieged enclave. These will not be violent demonstrators but frightened and helpless civilians, many of whom might be infected and the military response will have to be a non-violent one because Israel cannot claim it has any legitimacy to open fire on sick civilians.

Palestinians spray disinfectant as a precaution against the spread of the Covid-19 coronavirus, in the streets of Al Nusairat refugee camp, central Gaza Strip

VIB
suite
In their recommendations to the political leadership, the military wants government officials to act urgently in order facilitate international effort to mobilize aid for Gaza immediately, before the situation deteriorates.
At the moment, humanitarian assistance to the Strip is minimal. The monthly payment of 25$ million from Qatar continues to flow into Gaza but the help from the World Health Organization is a drop in the ocean compared what's needed in case an actual epidemic erupts in the enclave.
The 500 coronavirus testing kits supplied by Israel is also far from sufficient and the army says that Israeli govern must include the needs of the Gaza Strip in its procurement efforts and increase its supply of materials for infrastructure projects.
According to the IDF, the situation is both a warning that an outbreak might lead to a war and an opportunity to stabilize Gaza. Israel's relations with Hamas officials could improve on the basis of humanitarian cooperation, which could result in their total dependence on Israeli government as an outcome of this emergency.

Iron Dome intercepts rockets from Gaza over Ashkelon
(Photo: Reuters)
Military activity has been dialed down all around the world, with Russia canceling exercises on its borders and the U.S. postponing its largest drill of 25 years planned for the European arena.

Counter-terrorism operations have also been suspended, allowing the Jihadi terrorists time to step back and prepare for a later time.
The Lebanese terror group Hezbollah will most likely maintain a smaller public presence after many in that country see the Shi'ite movement as the one responsible for the coronavirus crisis in the country after Hezbollah officials brought the virus to Lebanon following their visit in Iran.
The last thing the organization needs is for Israel to act on its threats to severely punish anyone that poses any danger to its population.
In the West Bank, where the coronavirus tolls nears 100 cases, Israel and the Palestinian Authority are in full cooperation to combat the epidemic.
That leaves us only with Gaza.
It is in Israel's interest to ensure the impoverished enclave is not challenged by coronavirus to an extent that the worst-case scenarios materialize.

A Palestinian man sprays disinfectant as a precaution against the spread of the SARS-CoV-2 coronavirus which causes the COVID-19 disease, in the streets of Gaza City, Monday, March 30, 2020. (EPA Photo)