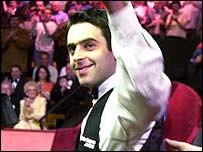 RONNIE OSULLIVAN, the former world snooker champion whose career has been dogged by drink, drugs and depression, has become the latest sports star to convert to Islam.

OSullivan, considered by many to be the most exciting player since Alex Hurricane Higgins, discovered the faith through his friendship with a top Muslim boxer.

The 27-year-old, who was raised as a Roman Catholic in Londons East End, made his act of conversion, called shahadah, at the Islamic Cultural Centre in Regents Park, London, last month.

During the low-key ceremony, the convert declared in the presence of a witness that there is no deity but Allah and Muhammad is his messenger.

It is a dramatic change of course for the enfant terrible of snooker who took the game by storm with the speed and accuracy of his play.

It is understood that the religion, which bans alcohol, has provided him with the strength to overcome his personal and family problems, including the jailing of his father for murder.

OSullivan, dubbed the Rocket, follows a clutch of famous sportsmen who have embraced the Islamic faith to overcome personal difficulties, including the boxers Muhammad Ali, Mike Tyson and Danny Williams, who last week retained his British and Commonwealth heavyweight title.

One of the key factors in OSullivans conversion was Prince Naseem Hamed, the former world featherweight champion, who introduced the snooker star to Khalid Yassin, a charismatic Muslim preacher.

OSullivan became captivated by Yassins message after seeing his videotape called The Purpose of Life  which is popular among Britains Muslim community.

In the video, the American-born Yassin, a frequent visitor to Britain, makes a case for the existence of Allah by raising a number of questions on the creation of the world and mankind.

In his address, Yassin, who is playing a leading role in a project to set up an Islamic satellite television station in Britain, says: What about the human body and its massive and intricate control systems? Think about it and the brain, how it works, how it thinks and how it functions. The creator who created this is the only one that is deserving of praise and gratitude.

OSullivans mother, Maria, said her son was not yet ready to speak about his conversion and was concentrating on snooker. Prince Naseem has been a good friend to Ronnie, she said. He has been the main factor (in the conversion). Ronnie is a lot better in himself since he converted. I hope it will steady him.

OSullivans persona is one of a troubled genius. As a precocious talent, he achieved his first snooker milestone  the 100 break  at the age of nine and at 15 became the youngest player to score 147, the maximum break possible.

As he progressed towards the top of his sport he achieved his triumphs against a background of family problems. His father was given a life sentence for murder in 1991. When he was 17, his mother was jailed for tax offences, leaving him to fend for his younger sister.

As he grew older, partying, alcohol and drugs took their toll, and at one time it was feared his excesses would ruin his career. His biggest coup came in 2001, when engaged to Bianca Westwood, he won the world championship despite being drugged up on Prozac to cope with depression. The relationship, however, collapsed.

Ahmed Versi, editor of The Muslim News, said OSullivans conversion could be explained by a yearning to fill a spiritual void. There is a spiritual vacuum in the West, he said. With so much materialism, Islam is now providing the spirituality that is lacking.

While Christian leaders seem prepared to give away their spiritual values and accommodate secularism, Islam remains constant.

Then Cassius Clay, he announced that he was a member of the controversial Nation of Islam organisation and later changed his name. It is understood OSullivan will also be given a Muslim name.

It is not, however, just the world of sport where there have been high-profile conversions. The singer Cat Stevens converted in 1977, changing his name to Yusuf Islam, and the British socialite Jemima Khan converted when she married Imran Khan, the former Pakistan cricket captain.